A 59.60 carat pink oval diamond called "Pink Star" was sold in April 2017 at Sotheby's in Hong Kong for a record $ 71.2 million ($ 1194600 / carat). The Pink diamond had a preliminary value of $ 60 million. The unique stone was acquired by the Hong Kong jewelry company Chow Tai Fook (CTF), which renamed the diamond “CTF Pink Star” in honor of the brand's name. The gemstone has excellent quality characteristics. The color of this diamond is Fancy Vivid Pink by the Gemological Institute of America, and IF is clarity. This diamond is classified as a rare type IIa. It was cut from a 132.5 carat diamond mined by De Beers in 1999 in Australia 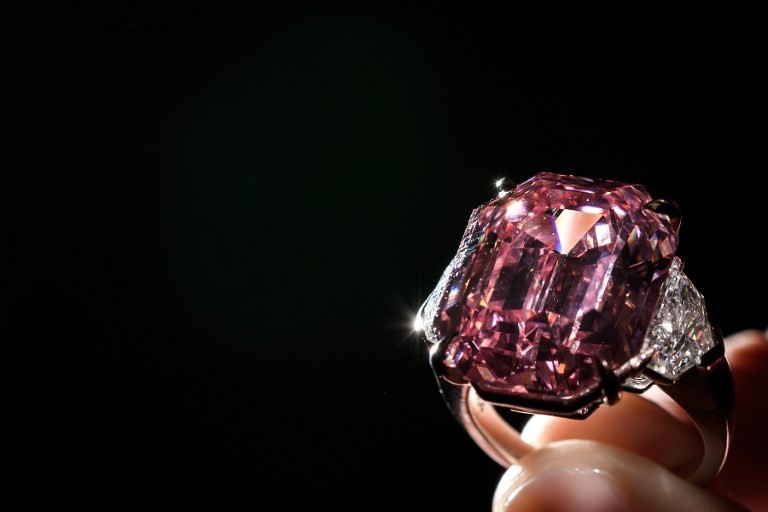 It took about 20 months to cut the stone. For the first time this diamond, under its old name "Steinmetz Pink", was shown to the public in Monaco in 2003. This Pink diamond has previously been exhibited at Sotheby's in November 2013 in Australia. Then he left for a record $ 83 million. But at the end of February 2014, it became known that the buyer could not pay for the diamond and the Sotheby's auction bought the stone for himself for $ 72 million. At the moment (December 2019), this is the largest and most expensive pink diamond sold at the auction. Also the CTF Pink Star is the world's most expensive gemstone ever sold at auction.

An 18.46 carat emerald cut bright pink "Pink Legacy" diamond was sold in November 2018 at Christie's in Geneva for US $ 50.3 million ($ 2,700,000 / carat). Estimate of the stone was 30-50 million dollars. The buyer of the jewelry was the Swatch Group, which owns the Harry Winston jewelry brand. The stone was given a new name in honor of the jeweler Harry Winston - "The Winston Pink Legacy". Pink diamond color - Fancy Vivid Pink, clarity - VS1.

The diamond from which this diamond was cut was mined around 1918 in South Africa and belonged to the Oppenheimer family, which owned the De Beers diamond mining company. The stone was finished in 1920. Winston's Pink diamond set a price per carat record for pink diamonds, which still (as of December 2019) has not been broken - $ 2.7 million / carat.

A 24.78-carat, rectangular, stepped-cut, rounded pink diamond was sold in November 2010 at Sotheby's in Geneva for $ 46.1 million ($ 1,860,000 / carat). The preliminary cost estimate of the stone was US $ 27-38 million. The new owner of the diamond was the famous jeweler Lawrence Graff, who gave the nameless stone the name "The Graff Pink". Stone color - Fancy Intense Pink (fancy intense pink), clarity - VVS2. A report on the stone from the Gemological Institute of Australia (GIA) also indicated that a diamond could potentially have a higher clarity FL if re-cut, while eliminating minor defects that would affect clarity ratings. The Pink diamond was also classified as a rare physical type IIa.

The history of this unique stone can only be traced back to the middle of the last century. It is not known for certain where and when the diamond was mined and cut. The first famous owner of the diamond was jeweler Harry Winston, who sold it to a private collector about 70 years ago. From then until this auction in 2010, the stone has never been put up for auction. It is now known that Lawrence Graff re-cut the acquired "The Graff Pink"... The new value of the stone mass is 23.88 carats, the loss was only 0.90 carats. At the same time, the risk of re-cutting the most expensive stone (at that time) sold at the auction turned out to be justified. The new GIA re-cut stone certificate now lists a more valuable color, Fancy Vivid Pink diamond, and has a clear IF. According to some estimates, the value of a jewel with such updated characteristics has increased by more than $ 10 million. In 2010-2017. this diamond was the most expensive pink diamond sold at the auction.

A large cushion-shaped Pink diamond "The Princie" weighing 34.65 carats was sold in April 2013 in New York at Christie's for $ 39.3 million ($ 1,135,000 / carat). Estimate was 20-30 million dollars. An anonymous collector became the buyer of the stone. Stone color - Fancy Intense Pink (fancy intense pink), clarity - VS2. It is also a rare type IIa diamond. The diamond from which the "Little Prince" was cut was mined over 300 years ago at the famous diamond mines of Golconda in India.

One of the owners of the stone was Osman Ali Khan, the ruler of Hyderabad, who was voted the richest man in the world by Time magazine in 1937. But after World War II, his financial situation deteriorated and the diamond was put up for sale at Sotheby's in 1960, where it was acquired by the jewelry house Van Cleef & Arpels. The diamond got its name in honor of the 14-year-old prince of Australia, who was present with his mother Maharani Sita Devi at the celebration of the purchase in the Parisian store Van Cleef & Arpels. The price reached in the auction makes this diamond the most expensive diamond from Golconda ever sold at auction.

A bright pink oval Pink diamond weighing 14.93 carats was sold in November 2017 in Hong Kong at Christie's for $ 31.8 million ($ 2,130,000 / ct). The preliminary cost estimate of the stone was $ 28-42 million. The buyer remained unknown. Stone color - Fancy Vivid Pink (fancy bright pink), clarity - VVS1. The stone is classified as a rare type IIa diamond. The original owner of the stone was Stephen Silver, a passionate Australia gemologist and jeweler who bought the diamond in 2013. The weight of the stone was then 16.21 carats, and the color was Fancy Intense Pink (fancy intense pink). Stephen suggested that if the stone was re-cut by changing its cutting parameters, then the color of the stone could become even brighter.

Popular posts from this blog

WHAT BIKE TO BUY? 5 TIPS TO GET YOUR CHOICE RIGHT

May 22, 2021
Buying a bicycle for some people is very simple, but for others it is more difficult. Knowing which bicycle to buy and making the best choice depends on the construction materials, the brands, and especially what use we will give the bicycle. In this sense, a lot depends on whether you are looking for a bike for daily and urban use or a specialized bicycle for practicing sports. So you are wondering what bike to buy, this article is for you. We will review all the aspects and tips to consider before buying a bicycle , whether it is your first bike or one to improve and renew the one you have. Today there is a lot of offer of bicycles and many users get dizzy before so many options. Before choosing your bike, you should ask yourself the following questions: Why do I want a bicycle? When and where will you use the bicycle? Does one have an area to store it? How much do you want to invest in a bicycle? Get the size of your new bike right After having answered all these questions
Post a Comment
Read more

April 08, 2021
Whether you are tiling the bathroom shower or the bathroom floor on your own, don't fall for these common pitfalls of tiling. Keep the following common mistakes in mind as you work to make the process easier and your results professional. Remember to consult a professional tiler if you need help. Choosing the wrong adhesive Use a waterproof adhesive for any tile around a bathtub or shower. Even the best-fitting tiles can let some water seep into the adhesive, and the non-waterproof adhesive will break down and crumble, eventually causing the tiles to crack and break. Do not forget that water can reach the adhesive in the form of condensation. Buy too few tiles You must buy more tokens than you think you need. The best compromise between cost and practice is to get 15-20% more than you expect to use. This insures against breakage, miscalculations and difficulties in cutting to size. You can keep reserve tokens in reserve in case any of them break down in the future. Alterna
Post a Comment
Read more

The bottle dress: how do you design a wine label?

April 21, 2021
On countless occasions, people choose a wine from an expert wine label designer in Australia , guided by the attractiveness or picturesqueness of its presentation, which is the dress on the bottle, and to which the wineries give increasing importance. What services does wine design offer to wineries? We recreate the dream of the winemaker or the winery in image. The process of creating wine is so exciting that when it comes to the dress of the bottle, we must communicate it. For over 20 years we have been working in the wine industry designing or dressing the product. As a second step, the promotional material required to position the product in the market is projected. We also offer advice on the name of the wine, the type of bottle and the capsule. What do wineries ask to express on the label? There is no common requirement, each one wishes to express their own philosophy: differentiation is the premise. It seeks to communicate a concept, tell a story, and that is generat
Post a Comment
Read more